The store will not work correctly in the case when cookies are disabled.
Menu
Account
Settings
Currency
GBP - British Pound Sterling

Known for their exotic and exquisite beauty, black pearls from the depths of the ocean have captured the world's attention. They are a very recent addition to the world of modern jewelry, only finding their way into pop culture in the mid-1900s.

Black-lip pearl oysters or the Pinctada Margaritifera are the sources of these mysterious black pearls.

Among commercially farmed pearls, Tahitian pearls are considered the second most valuable pearl in the world. Tahitian pearls come by their dark color naturally, unlike black freshwater pearls and black akoya pearls, which are dyed or irradiated to make them black. Pearls from Tahiti are bead-nucleated, but the nacre on these pearls is typically thicker than akoya pearls. 0.8 mm is the thinnest nacre permitted by French Polynesian law for export, which would be considered extremely thick in akoya terms.

Subscribers will also receive a free pair of silver freshwater earrings, worth £29.50, with their next Pearl Gallery purchase!*

SIGN UP FOR EXCLUSIVE UPDATES, NEW ARRIVALS AND INSIDER-ONLY DISCOUNTS

*Free earring gift only redemable with valid code sent in Newsletter welcome email. 1 per customer. Cart total must be above £50.00 for code to apply. Pearl colour may vary. 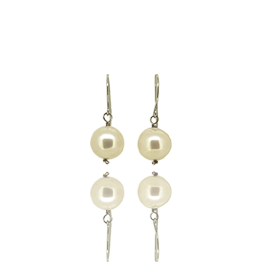